Today we get to experience the launch of Classic World of Warcraft, an experience that not many still playing were around for.  For a great many of us we got our start in later expansions, we never got to experience Day 1.  Comparing Classic WoW to current retail is like the image above.  Hopefully we wont see a repeat of the Titanic’s fate. 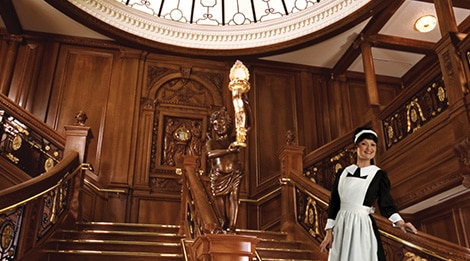 When we look back at 2004 compared to today, we see people were using Windows XP, 128mb of Ram, maybe a 30 gig hard drive, most did not have the money to buy a 3d graphics card, and who really had high end PC’s for gaming. An average PC by today’s standards would have been top of the line custom back then.  It may have only been 15 years, but looking back then compared to today, gaming has come a long way.  The back bone of our game may still exist, but it have been improved upon.  But when you look back at the classics, sometimes there is more to it than nostalgia.  Older homes were built to last, when you look at the lumber used 100 years ago compared to today’s standards there is no comparison.  My uncle had a farm nearby, when he finally sold to developers they tried to tear the barn down, it was a huge structure, maybe 40 feet tall and certainly over 70 feet long.  They took off all the sheathing, the roofing, everything, the only thing left was the basic frame.  I watched with the rest of the family as they hooked up a chain to a bulldozer and tried to pull it over, and watched the bulldozer just sit there not moving digging itself deeper into the dirt.  They tried using a chainsaw to cut some of the timbers in half and tried again.  By the end of the day they had given up and ended up bringing in a large crane so they could take it apart from the top down.  The barn was not fancy or glamorous, it was a basic barn, it did what it was supposed to do, and did it well.

When we look at the current state of WoW, we are looking at 15 years of people wanting to add their mark on the game, making subtle changes, sometimes major, adding more and more on to it every expansion, sometimes every tier.  At its base it is still that old barn and it is still doing its job.  Adding fresh paint, or slapping on an addition does not change what it was, certainly you could clear it out, and remake it into a huge home, or a business, or even a rec center for kids.  As we prepare for our first day of playing Classic WoW, we have to remind ourselves, that the original game is not what we know today, sometimes we have to step back and look at it for what it was, a good solidly built barn that has weathered storm after storm of WoW killers, abuse from players demanding that it be more.  When you look at the Titanic, and the modern day cruise ship, are they really that much different?  They get you from point A to B, offer luxury rooms to stay in, gourmet meals, a memorable experience.  So look at today not as an OMG, I forgot how bad things were back then, this sucks, but more of the experience of being able to say I was there the day they rebooted original Warcraft, it had flaws certainly, but it was fracking original Warcraft, how cool is that.

This site uses Akismet to reduce spam. Learn how your comment data is processed.

Writing to Inspire your Geek Life

Fun for the whole asylum!

The doctor who loves literature!!!

Michelle Rose. Reflection of My Journey

Drowning in the busyness of life, and how I stay afloat, and find peace and stillness amidst the chaos

Organized Chaos
STOP AND HAVE A THOUGHT

The many adventures of Ailey Bailey

Understanding Virtual Worlds Through a Lens of Reality

The Rambling Priest
Time to Loot

Finding fun in loot and adventure

Nerd With An Afro

Music, Movies, and Other Entertainment